We are proud of our more than 4-year-history and 91 supported projects worth more than 2 million UAH. And we are looking forward to the new season that will start on March 15th. As Urban Space 100 has shown, the idea of directing a significant portion of the restaurant’s profits to support city projects has proven to be effective and attracts many people. So it’s not surprising that over a few years, the Teple Misto platform, which came up with the idea of Urban Space 100, has received over 250 replication requests from different cities of Ukraine and abroad. The first example of the social franchise was Urban Space 500 in Kyiv opened by Insha Osvita (Other Education) NGO and DRUZI Cafe &amp; Bar, and, of course, its half a thousand co-founders. Teple Misto intends to further develop the Urban Space social franchise programme.

Today, at the start of the new grant season, we would like to look back at the 15 ones that came before.

You heard of them

Each of us has definitely heard of the projects in Frankivsk supported by Urban Space 100, but may not be aware of the connection. For instance, Street Music Day and Music Trolleybus, Dance Fest by Apache Crew, one of the best Ukrainian dancing crews, or Urban Space Radio projects (Urban Xmas Radio, Nuiaktobiskazaty (How Shall I Say It) marathon);

Or creation of murals and restoration of vintage doors, Kino Za Kadrom (Behind-The-Scenes) conference and the forum on cultural processes in the regions, etc.; or also a wheelchair repair project at medical institutions and a boccie competition for people with disabilities, as well as organisation of student’s spaces and children’s activities (a family picnic or Nativity Play school), Share Food project and the adventure park for children with severe speech delay or autism (currently, the most expensive project with 72,000 UAH grant). The list goes on, because Urban Space 100 has funded 91 projects totalling 2,121,164 UAH over 4 years of its existence.

Projects are very different: not one topic is a priority. The point is that an idea should be implemented in Frankivsk and aim at improving life in the city, opening new topics and possibilities. The Urban Space 100 Grant Fund is formed from 80% of the restaurant’s net income and distributed to projects on a quarterly basis. That means that when a visitor has a coffee or a meal in the restaurant, he or she contributes to the city initiatives. The Urban Space 100 General Meeting of Co-founders determines the successful projects submitted for grant competitions (4 per year). 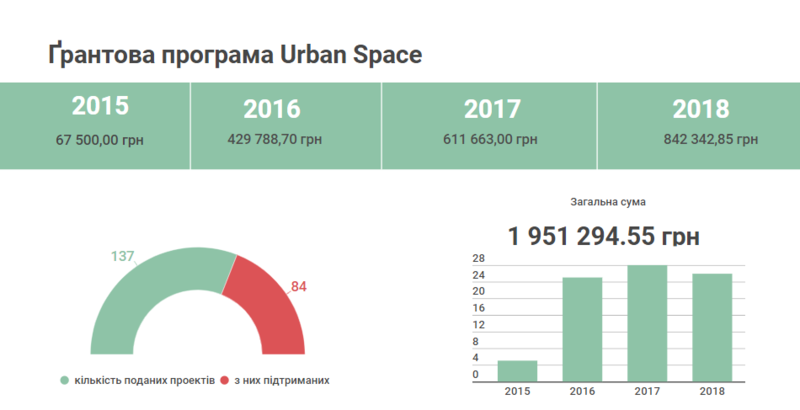 Last year, research and restoration of the antique signs in the centre of Ivano-Frankivsk, Eco City air quality monitoring projects, Brama Fest (the grant covered the prize fund of the Fantasy Literature Competition winners and publication of the best texts’ collection) grabbed the attention of public and media.

Obviously, not every project we believed in delivers upon expectations. A project team may have little experience, or an idea just is not in great demand among citizens, or there are other roadblocks. Besides, it is not that simple to measure the effect of “soft” projects, such as conferences, festivals, educational events, where we convey information, knowledge, skills, generate ideas, develop critical thinking, emotional intelligence, etc. “Hard” solutions are easier to evaluate: you can see or even touch changes such as infrastructure improvement. However, it’s important for the Teple Misto team to understand how the projects supported by the restaurant change Ivano-Frankivsk: the effects will be further analysed through an independent opinion survey. Yet it’s obvious even without any analysis that more people have great ideas, are willing to learn and act, understand that the quality and comfort of life in the city are in their hands. If the co-founders do not find worthy initiatives, part of the funds generated in a quarter is transferred to a deposit account to wait for future awesome ideas.

Some initiatives supported by Urban Space 100 become successful. And it is always a cause for celebration when a project develops sustainably – a team grows professionally, attracts funding from different sources, forms a community. For example, once the public restaurant supported the publication of Arduino Robotics book for beginners to use in school and afterschool classes in the city. The children who had attended the Arduino Robotics classes then implemented Eco City Project (also under the Urban Space 100 grant).

Schoolchildren produced a device for monitoring air quality parameters, and now these devices are located in several places of the city, so citizens always know what they breathe. Young roboteers and their mentors still have a lot of interesting ideas.

It’s great that thanks to the restaurant’s grant support people can go to high-quality thematic events, such as open events of Design Village Conference, Veloforum (the largest cycling event in Ukraine), and City Scanning Session Urban Fest.

Some grant seasons include events aimed at encouraging citizens and explaining the Urban Space 100 Grant Application Submission Procedure (for example, how to clearly convey the concept and the importance of your project in a 3-minute video for the co-founders).

“We want a reset. This season, we would like to see exciting, forward-thinking projects that are groundbreaking both thematically and in format as well as useful for the city and its inhabitants. We are looking forward to them! If you have a technical problem, say, how to fill out an application or make a video, please contact me. I’ll give advice to your team. This season we also have the event scheduled to remind everyone interested and tell newcomers about the details of the Urban Space 100 grant programme. If you have an NGO, an awesome idea for the city and a plan to implement it, you’re welcome! Ivano-Frankivsk needs good ideas and solutions, because it is our future.

“We are glad that many are inspired by the idea of Urban Space public restaurant, which comprises the association of co-founders; transparent grant fund to support urban projects; Urban Space Radio; and the event venue. By the way, Urban Space 100 has held 920 events for 4 years of its existence! They are always open for everyone interested. Urban Space 100 is a successful social business model and an exemplary creation of something unique and interesting for the world in the local context.”