Urban Space 100 is the first social restaurant in Ukraine, opened on 27 December 2014 in Ivano-Frankivsk.

The place is a combination of a restaurant, an open platform for events and a shop aimed at popularising local and Ukrainian brands. Moreover, the studio for the online radio Urban Space Radio is integrated into the space.

The Urban Space 100 social restaurant is a unique case of social entrepreneurship. Each quarter, 80% of the space’s net profit is allotted for the support of projects that make our city better.

The grant is open to non-commercial projects aiming to develop Ivano-Frankivsk. Winning projects are evaluated and selected by the founders of Urban Space 100 at general closed meetings through a vote.
Since its opening, Urban Space 100 has funded 65 projects worth over UAH 1 million. In 2017 alone, 29 projects were financed for a total of UAH 631,663. 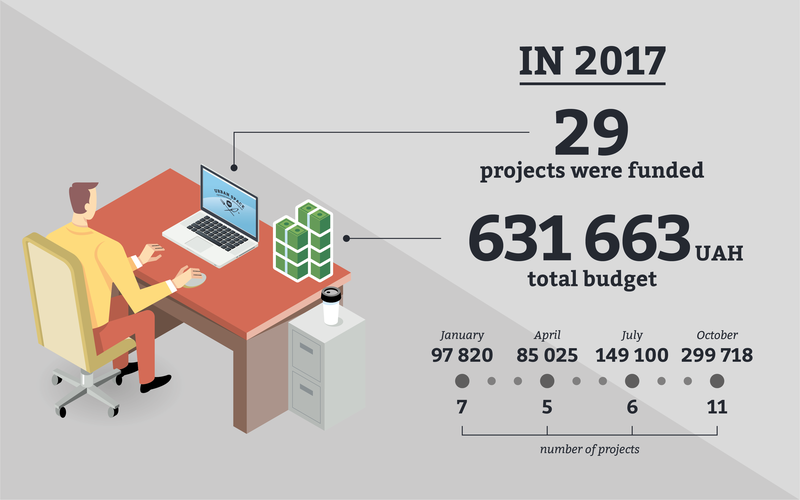 More details about the projects are available in the section.

Ira Slobodian, the event organizer, says: “It wasn’t difficult to apply for the Urban Space 100 grant because the application form contained rather simple questions and a series of simple minimum requirements. Why did I decide on particularly this grant? I had no similar experience before and the requirements seemed to me quite simple. The grant has allowed us to organise a great Street Music Day in Ivano-Frankivsk two years in a row. It is easy to apply for the Urban Space 100 social restaurant grant. Due to it we get great opportunities to launch important initiatives for our city.”

The project team set a goal to introduce professional and amateur filmmakers, people interested in filmmaking and representatives of cinema-friendly businesses and local authorities to positive trends and prospects of film production in Ukraine and the region and to contribute to the formation of a human-resources formation in film industry. The conference was held with the participation of professional Ukrainian filmmakers and all interested parties in the form of reports and discussions.

Natalia Kobryn, project manager of the NGO Kinoroby (Filmmakers), says: "In general, there’s nothing complicated about the process of applying for the Urban Space 100 grant. Even for people like me who are doing that for the first time. To be honest, the process of filling in an application might not be that exciting, but it helps you put into words what exactly you want to do. Most importantly, keep the deadline in mind. Feedback from curators is also of value, as your questions and needs will surely be addressed and you’ll resolve everything together.
“In my opinion, being able to hold the Za kadrom conference in Ivano-Frankivsk is a remarkable achievement. All invited speakers (famous directors, camera people, producers, animation directors, visual effects and sound design specialists, known for the movies Brothers: The Final Confession, Battle for Sevastopol, The Stronghold, the animated cartoons Mavka, The Forest Song and The Stolen Princess) have gladly agreed to come and share their experience with everyone interested and talk about their profession.

It’s an incredible feeling when you see how your idea is fully realised from just words on paper a few months ago and fuelled only by the team’s ambitions. But we did it thanks to the Urban Space 100 grant, the FILM.UA Faculty education partner, and the 100Cubes production studio.
“So, if you have a cool idea, which you think will give a boost to positive changes in Ivano-Frankivsk, you better not put it off till ‘later’. Just apply for the grant and implement your project. Good luck!"

The initiative was introduced by Vasyl Stefanyk Precarpathian National University students who wanted to create the open student co-working space Paragraph on the premises of Precarpathian National University Scientific Library reading room. Students need a charge-free place to spend time with their friends, to study or work on their laptops and discuss their own ideas and projects. Paragraph will be a place for meetings, work and rest, holding lectures, presentations, training sessions and workshops, competitions and watching movies, accessible for free with constant Wi-Fi and nice renovation and furniture. The project is currently being implemented.

Viktor Lesyk, the project coordinator, says: "It wasn’t difficult applying for the grant, for we have already had similar experience with City Grants from Teple Misto. To make your idea a reality is more complicated especially when you’re doing that for the first time and don't know what problems you may face while implementing the project. We have decided on the Urban Space 100 grant because it was a great opportunity to start fundraising when you have no considerable experience but have a genuine desire to introduce positive change. ‘If others have managed to win, then we’ll definitely do,’ our team hoped (and for good reason☺).

Project implementation was a bit slow in coming because of lack of experience and some obstacles beyond our control, but we have recently finished creating eco-furniture from wooden pallets. We are waiting for the equipment the Department of Culture has promised to provide soon (from the 2017 Participation budget). Then we’ll be able to give the planned project presentation.”

The Urban Space 100 grant spring season lasts until April 15. The rules haven’t changed: download and fill in the application form, record a video and send it to one of the restaurant co-founders whose FB account can be found on the website Urban Space 100.